This is an assembly guide for the SimpleBot Shield Kit.

You will need some common electronics tools in order to build the SimpleBot Shield:

It is also helpful to have some Blu-Tac to hold components in place while you solder them.

Bear in mind that soldering is a potentially hazardous activity. You should wear eye protection while soldering, wash your hands afterwards if using leaded solder, and make sure you work in an adequately ventilated area.

After you open the SimpleBot Shield Kit packaging, you'll find the following parts: From the top, clockwise around the outside:

Start by soldering the four male Arduino pin headers to the bottom of the PCB. The male pin headers are supplied cut to the correct length to match each header on the PiLeven:

To solder these headers, it's easiest to use an Arduino-compatible board as a "jig" to keep the headers straight while they are being soldered.

For these photos we used a Freetronics Eleven. Place the four sets of headers into the matching pin sockets, like this: Then place the SimpleBot Shield PCB on top: Once all four headers are soldered, you can remove the shield PCB and it should stand by itself: The next items to solder are the screw terminals. Each individual 2-pin screw terminal can slot together into a longer unit, like this: 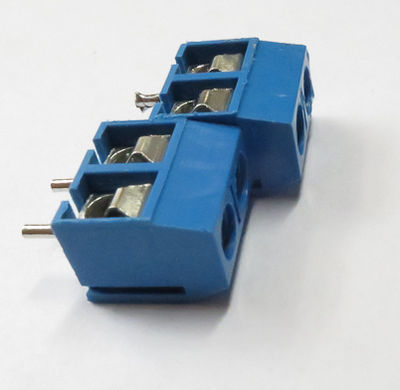 The SimpleBot shield has one row with 6 terminals (three units joined together), and one side with 4 terminals (two units together). Slot the terminals together and place them on top of the shield back to back, with the terminal openings facing out: Use Blu-Tac to hold them down while you flip the shield to solder them, or if you're careful you can just use gravity as the board rests on them upside down: Next step is to solder the 6V regulator and the electrolytic capacitors.

All of these components need to be oriented correctly, and can be damaged if you fit them backwards. Place the regulator as shown, with the large metal tab facing towards the screw terminals. Electrolytic capacitors have a grey stripe on the side marked "-", which is the negative side. The circuit board has a small plus marked next to the pin for the positive side. Both the positive sides face towards the regulator, as shown, so the capacitors are "mirrored" in orientation to each other.

You can bend the pins on the capacitors and the regulator to make them stay in while you solder them, or use Blu-Tac. After they are soldered you can cut the leads off. Make sure you hold the lead while you cut it, so that it doesn't shoot off like a tiny metal javelin straight into your eye: Next step is the LDR (light dependent resistor), the 4-pin female header for the Ultrasonic Range Sensor, and the two 3-pin male headers for the "Motors" (actually continuous rotation hobby servos, not normal motors).

Place the parts into the PCB as shown. Orientation doesn't matter with these parts. It's recommended you leave the LDR sitting high above the PCB surface, as shown, so you can bend it forwards 90 degrees to create a directional light sensor. The 10k resistor forms a voltage divider with the LDR in order to output a voltage proportional to the ambient light level.

Bend the leads of the resistor so that it slips neatly into the holes on the PCB: The reset button pushes into the four mounting holes as shown (you will need to apply some pressure, but then the shape of the legs will hold it in): Before connecting anything, check over the shield one last time for any solder bridges and also double-check the that the regulator and the electrolytic capacitors aren't installed backwards: For a final step, insert the Ultrasonic sensor into the four pin female header.

Here's a fully assembled shield, mounted on a Freetronics PiLeven and a Raspberry Pi 2 Model B: